Utility work in the Crystal Spring area will begin Monday, April 19; traffic will be detoured around work zones. 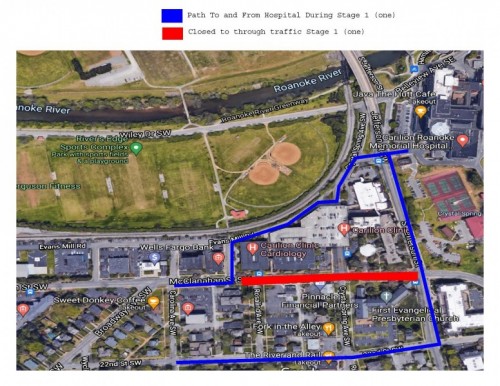 Stage 1 To and From CRMH draft JDP

Over the next few months, Roanoke Gas and the Western Virginia Water Authority will be doing utility work in the Crystal Spring area of Roanoke related to Carilion's Crystal Spring Tower expansion.

The work will begin Monday, April 19 and is expected to continue through the end of June. While the work is being conducted, there will be some detours around the area.

All work will take place during normal business hours; the city reserves the right to change this at any time.

This work will begin Monday, April 19 and is expected to take 1-2 weeks. The city will close the two blocks of McClanahan Street between Rosalind Avenue and Jefferson Street. They will place numerous signs to help detour traffic around the work site.

Traffic heading toward the hospital on McClanahan Street during this time will need to detour by turning left on Rosalind Avenue, then right on Evans Mill Road and right on Jefferson Street to the hospital's front entrance. The map above shows the work area as well as the detour routes into and out of Carilion Roanoke Memorial Hospital; click on the image to see a larger view or download it.

This work will begin after Stage 1 is completed. It is expected to take 2-4 weeks. This stage of work will require the southbound lane of McClanahan Street between Crystal Spring Avenue and Jefferson Street to be closed. Traffic will be detoured around the lane closure. There will be one northbound lane open to traffic, and no parking will be allowed on that block of McClanahan Street until this stage of work is complete.

This work will begin after Stage 2 is complete (approximately the end of May). During the hours when work is being done, the traffic signal at this intersection will be disabled and placed in flashing mode.Traffic will not be able to make left turns through this intersection, and the southbound lane of McClanahan Street will remain closed.

This work will begin after Stage 3 is complete. The work zone for this stage will tie in to the existing work zone on Jefferson Street, which already has closed the right lane. No further traffic disruption is expected.

We will provide updates as this work moves from one stage to the next.