In 2019, the hospital saved 15,621 gallons of fuel oil; enough to heat 31 homes for a year. The Maintenance department was recognized as a Platinum Carilion Sustainability Hero for demonstrating a commitment to sustainability for their role in these savings.

When Mark Kaldahl, director of Facility Support at Carilion Franklin Memorial Hospital (CFMH), joined Carilion in 2013, one of his top priorities was to find new ways to be energy efficient.

After seeing steam blowing out of vent pipes, a sign that the boiler system was over-pressurizing, he knew that the steam system was the best place to start—and where they could make the biggest energy savings.

“I noticed that our boilers were running 100 pounds of pressure, which is what was originally recommended, but when I started looking at what we actually needed in the building, I found that the only thing that required much steam were the sterilizers in surgery. And that only needed 40 pounds,” said Kaldahl.

Boilers produce steam, and the steam is used to heat patient rooms and hot water and sterilize equipment for surgery.

Given the age of the building, the boilers are not computerized, and every adjustment needs to be done manually; something that Kaldahl specializes in and loves to do. The system also involves about 200 steam traps, which catch the unused steam that cools off and turns back into water that gets sent back to the boiler.

Staying on top of repairs for the steam traps, lowering the steam pressure and finding the right settings to let the boilers run on cruise control has resulted in dramatic energy and fuel oil savings.

Kaldahl has been tracking the savings since making these adjustments. In the years prior to 2013, the hospital used an average of 63,850 gallons of #2 fuel oil per year to operate the hospital boilers. Since then, the annual fuel usage has dropped to 44,852 gallons, a drop of 29.7%. According to Davenport Energy, that's enough to heat 31 Virginia homes for a year.

“We’re trying to grow our sustainability efforts in our community hospitals,” says Sara Wohlford, Efficiency and Sustainability manager. “In addition to the fuel oil savings initiative that Mark has taken on, we’re getting ready to launch a single-stream recycling program, with the projection that CFMH will be recycling over 7,440 pounds a year.”

Single-stream refers to a system in which aluminum, plastic and paper don’t have to be separated to be recycled.

"Employees at CFMH have been requesting a recycling initiative and we're excited to get the program going," adds Sara. "Minimizing our impact on the environment is an implicit part of our mission, vision and values."

Reducing fuel oil usage, recycling, integrating the Mission Donation Program for unused medical supplies and working on a linen efficiency program are just a few initiatives that CFMH is taking on to decrease our carbon footprint and divert as much as we can from landfills.

"The leadership group and our entire staff at CFMH are well aware of how money-saving ideas go back into our community and to our patients," says Carl Cline, vice president of CFMH. "I am so proud of the work that we do here, and for Mark's leadership on the fuel oil project that demonstrates the impact that energy efficiency can play in our health care environment."

Kaldahl and CFMH's Maintenance department were also recently recognized with top honors as Platinum Carilion Sustainability Heroes for demonstrating a commitment to sustainability in their work at Carilion with this project. They were one team of six recognized system wide. 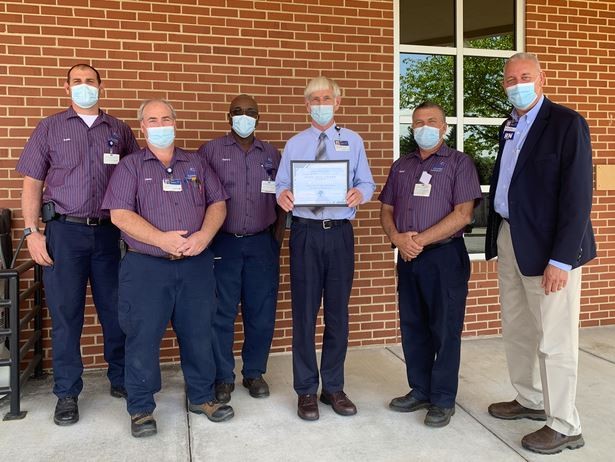