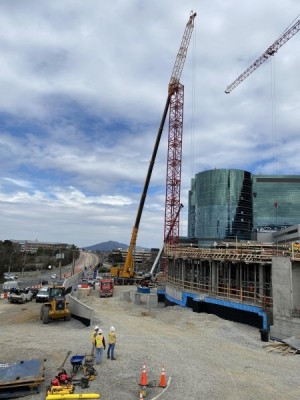 The new crane is 210 feet tall and is able to pick up to approximately 22,000 pounds of material helping to construct the vital steel infrastructure, stairways and elevator banks required prior to erecting the exterior walls of the tower. This follows a 240-foot crane that was installed in June 2021 at the construction site, which was the second-tallest structure in the Roanoke Valley, according to Robins & Morton and Branch Builds, the general contractors for the Crystal Spring Tower project.

Carilion’s Crystal Spring Tower site is part of a $400 million expansion to Roanoke Memorial announced in May 2019. The expansion project addresses community needs that have been identified through Carilion’s community assessments and additional research. Expected to finish early 2025, the 400,000 square-foot tower will include an expanded Emergency Department, Cardiovascular Institute, second helipad and additional parking.

As the region's only Level 1 trauma center and a tertiary and quaternary facility, Carilion Roanoke Memorial Hospital typically receives patients from more than 60 hospitals across Virginia, West Virginia and North Carolina during any given year. This expansion will improve access to world-class care for local patients and those far beyond the Roanoke Valley.

Watch construction as it happens on the the live webcam. Drone video available here.