It’s a typical day on Carilion Roanoke Memorial Hospital’s 5 West, and Jen Hetzel is making the rounds. Today, Hetzel, a certified peer recovery specialist, is checking in on patients receiving antibiotics for infections related to drug use. “How’s your day going?” she asks one man. “Is there anything you need?” If the patient is amenable, she’ll pull up a chair and sit with him for an hour or so, chatting about his experiences.

“We talk about how they feel and how those feelings affect their recovery,” she says. But not everyone is ready to share. “If a patient doesn’t want to talk to me, that’s totally fine,” she explains. “But I keep showing up anyway and letting them know I’m invested in their care.”

That’s not just lip service. Like other certified peer recovery specialists, Hetzel isn’t just trained to provide support to patients struggling with substance use, mental health concerns, and other challenges. She’s drawing on her own lived experience to motivate and inspire them.

“I’m using myself as an example to show people in the throes of addiction that there can be a positive way forward,” she says. “I’m offering hope that even if they’re struggling now, they can work through it, too.” 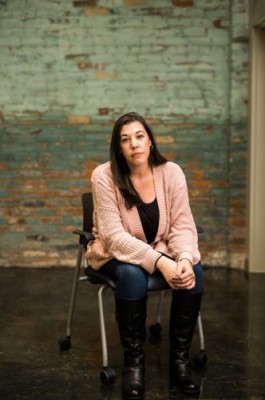 It’s a role Hetzel wouldn’t have imagined for herself just a few decades ago. A good kid from a supportive middle-class family, she was popular, did well in school, and was a cheerleader—even dating a football player in what she calls a clichéd but typical teenage romance. “I’d venture to guess that no one ever expected me to develop a problem with addiction,” she says.

Although she and her boyfriend experimented with prescription drugs as a way to relax and unwind occasionally, Hetzel says they were naive to their addictive potential and instead viewed pills as a mild alternative to alcohol. “We didn’t recognize this as risky behavior,” she says. “In my mind, it was similar to having a beer on the weekend. I never felt like I needed them.”

That began to change when, at 21, routine oral surgery left Hetzel in debilitating pain. After having her wisdom teeth removed, she developed searing chronic jaw and ear pain that had seemingly no explanation. The 60 daily milligrams of Oxycontin that her surgeon had prescribed barely alleviated it. When a specialist couldn’t identify the source of the pain, she left his clinic in tears.

“I distinctly remember the doctor telling my mother that I was seeking drugs and making the entire thing up,” she says. “Hearing these words devastated me and filled me with a sense of hopelessness and despair that’s difficult to describe.”

The next few years were filled with bone scans, physical therapy, and visits to pain management physicians—but the pain remained. Hetzel gradually began to misuse the opioids she was prescribed, desperate for relief and terrified the pain would get worse. Eventually, she was taking so much medication that she would run out of her monthly prescription in just three days. She found herself buying pills off the street just to avoid feeling sick—and to be able to pass the drug screens administered at the pain management clinic.

Five years later, Hetzel was still showing up for appointments at the pain management clinic and passing those drug tests, hiding her reality of substance use while keeping up the appearance of a model patient. That all changed one morning in 2013, when a pregnancy test revealed that her symptoms of nausea and fatigue weren’t part of the withdrawal and addiction cycle to which she had become accustomed. She was five months pregnant and dependent on opioids. She knew she needed help.

But Hetzel wouldn’t find it from her pain management provider, who told her the clinic didn’t treat pregnant women and released her as a patient. Feeling guilty, ashamed, and alone, she made her way to a free clinic, and then a treatment program through Carilion Clinic that offered buprenorphine. “I knew I didn’t have a choice,” she says.

That July, her daughter was born, healthy and free of complications. “I stumbled my way into recovery because of her,” Hetzel says, “and the incredible providers who gave me a solution I didn’t know was possible.”

She went on to have a second child and found a new oral surgeon to address her dental problems without using narcotics. Now six years into recovery, Hetzel says that substance use has permanently changed her life, both for better and worse. After her children’s father died from his own addiction, she became even more determined to make a change.

“That gave me the shove to do something more,” she says. Previously a stay-at-home mother, she began doing her own research on the opioid crisis and learned about the role of certified peer recovery specialists in treatment. “I was ready,” she says, “to start giving back.”

Certified peer recovery specialists are uniquely positioned to support people facing substance use disorder, mental illness, or other challenges, relying on their own personal experience while applying the skills they’ve developed through intensive education. Hetzel, who first heard about the profession from her own clinicians, underwent 72 hours of specialized training on how to work with people not yet in recovery. She also completed 500 hours of volunteer contact with patients—no easy feat for a single mother who lived an hour away from Carilion Roanoke Memorial Hospital. Yet it’s the perfect calling for Hetzel, who views her struggles with substance use as a benefit to the profession.

“I believe my experiences have gifted me with the unique ability to meet someone in their darkest moments and offer tangible hope,” she says, “because I can say ‘me too’ and ‘you’re not alone.’”

Indeed, a large part of the peer recovery specialist’s job is to act as a role model while helping to remove the stigma that still surrounds substance use disorder and mental illness. “I didn’t have a peer recovery specialist when I was in treatment, and I felt incredibly isolated and stigmatized as a pregnant woman,” says Hetzel. “That’s why I wanted to do this.” While she sees a wide variety of patients, she finds that she especially relates to expectant mothers with substance use disorder. “That’s my passion,” she says.

Although the position is relatively new to Carilion, certified peer recovery specialists can already be found throughout Carilion Roanoke Memorial Hospital, from the Emergency Department to the inpatient units. Hetzel and her colleagues also work with outpatient, in-group settings, and in the community. But they all have lived experience that no amount of training or education can replicate. And they all have the same goal: “We always try to take on the role of advocates,” Hetzel says.

That can mean helping people work to achieve goals for recovery, supporting their treatment, modeling healthy behaviors, serving as inspiration and motivation, and teaching them to advocate for themselves so they can obtain necessary services and care. They focus on helping people help themselves—all while treating their peers the way they would have wanted to be treated when they were in their shoes. They’ve been through similar situations, so they view relapse not as a failure, but as a bump in the road.

“People with substance use disorders get written off all the time,” she explains. “We want them to know that we want the best for them, and that we’re never going to give up on them—ever.”