In 1971, when Roanoke Memorial Hospital established one of the nation’s first family practice residencies, it was embracing the need for a new kind of physician who could help alleviate a dire shortage of primary care doctors while providing better, more holistic care. At the time, Roanoke had far too few general practitioners to go around, and many people in the community had little choice but to go to the hospital’s emergency room for routine medical care. Family medicine, recognized as a specialty just two years earlier, seemed like just what the doctor ordered.

Family physicians would serve as the hub of a patient’s care, providing most of it themselves, emphasizing prevention, and coordinating referrals to other specialists. But to train this new kind of doctor in outpatient medicine as well as in the business side of running a medical practice, Roanoke Memorial needed to create something entirely new. It established the Family Practice Center, a medical office carved out of the hospital’s warehouse.

“The heart and soul of the family practice residency was this model unit, which was only the second such family medicine practice in the state,” recalls Francis Amos, M.D. The first graduate of the hospital’s family practice residency, Dr. Amos became associate director of the program. To jumpstart the Family Practice Center, Dr. Amos combed the hospital’s outpatient records and gave patients the welcome news that they could be part of the new practice. Making appointments would be much more convenient, waits would be shorter, and they would be able to establish relationships with their own personal doctors rather than seeing whatever physician happened to be on duty in the emergency room or in the hospital’s outpatient clinic.

Yet family medicine was so new a specialty that Dr. Amos and directors of the handful of other family practice residency programs nationwide had few guidelines to follow. Often they would gather at the American Academy of Family Practice’s headquarters in Kansas City to swap ideas on how best to train residents. With emergency medicine not yet a specialty, part of that training called for family practice residents to take shifts in the ER. If they needed help, they would call their faculty mentors, and Dr. Amos remembers a July 4 boating accident that landed eight people in the ER. “The resident and I sewed lacerations all night, splinted broken bones, and admitted those with internal injuries,” he says. “Working in the ER was an incredible learning experience for our family practice residents.” 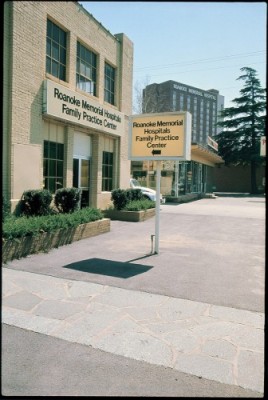 A Magnet for New Physicians

But Carilion Roanoke Memorial’s pioneering work in family medicine was just one of many efforts, begun in the 1930s, to give new doctors the skills they needed to provide high-quality care to the community. Continuing that tradition, last summer Carilion Clinic, which now includes Roanoke Memorial as well as six other hospitals, welcomed 300 physician trainees to 26 residency and fellowship programs. During their training, these new residents and fellows will play an essential role in serving the health system’s one million patients in southwestern Virginia and southern West Virginia. They’ll also be trained according to standards set forth by the Accreditation Council for Graduate Medical Education.

“Training requirements for accreditation are now big documents, not the few pages that existed when I was a resident in the mid-1980s,” says Donald W. Kees, M.D., vice chair of pediatrics and designated institutional official for graduate medical education at Carilion. “All programs now have common training requirements that govern such issues as the number of hours a resident can work, patient safety standards, and how residents, faculty, and programs are evaluated.”

Many residents and fellows who have trained at the health system’s hospitals stay on after they complete their training, joining Carilion’s medical staff and establishing practices in underserved areas. “Every year, about 30 percent of our trainees remain with Carilion when they finish residency or fellowship,” says Dr. Kees. “Compared with other rural areas, we have a large number of primary care doctors and specialists available to our patients.”

Over the past several years some difficult-to-recruit specialists—including, for example, two child psychiatrists and an addiction medicine psychiatrist—have stayed to practice in the region after training at Carilion. The neurosurgery residency has brought four additional neurosurgeons to the community. Several graduates of the emergency medicine residency, a comparatively new addition to the hospital’s offerings, have chosen to practice at Carilion, eliminating the need for locum tenens emergency physicians in some of the system’s hospitals. At the same time, the residency programs have drawn many accomplished practicing physicians to the Roanoke area.

They come expressly for the opportunity to train young physicians. “If we didn’t have residents at Carilion, we wouldn’t have the quality of faculty that we have,” says Daniel Harrington, M.D., vice president for academic affairs at Carilion and vice dean of the Virginia Tech Carilion School of Medicine. Dr. Harrington, who established a psychiatry residency at RoanokeMemorial in 1990, led graduate medical education at the hospital for many years before taking his current position. Residents and fellows also affect the quality of care for Carilion patients through the research they conduct as part of their training. Most residents participate in quality and patient safety research projects with a faculty mentor. In recent years, those projects have resulted in quality improvements such as putting alerts in electronic health records to prevent the ordering of MRIs for patients with pacemakers and standardizing the placement of inferior vena cava filters in patients at risk of blood clots. Some residency programs and all fellowship programs at Carilion also require research in the physicians’ medical specialties.

Joshua Eikenberg, M.D., for example, recently received national recognition for a study he conducted of patients who had undergone Mohs surgery for their skin cancer. The dermatology resident found that physicians’ perceptions of their patients’ pain influenced their opioid-prescribing practices and that patients who received opioids were no more satisfied with their pain treatment than those who did not receive the addictive painkillers.

A History of Education and Service

The first interns at Roanoke Memorial Hospital arrived in 1933, but it wasn’t until 1946 that the American Medical Association, then the accrediting body for graduate medical education, put its stamp of approval on the hospital’s internship program. At the time, general practitioners could hang a shingle for their own practices after a one-year hospital internship. World War II had emptied medical schools, and practicing physicians were called to active duty, leaving Roanoke Memorial with just nine staff doctors and interns during the war. By the late 1940s, the hospital had four interns who were paid $90 to $150 a month, plus room, board, and laundry. In the 1950s, as medicine became more sophisticated and specialized, hospitals created residencies to extend and deepen the training of new doctors.

“We were in demand from the very beginning, because there were so few family practice residency programs,” says Dr. Amos. “And even though family practice residency programs at university medical centers had prestige, many young doctors preferred to come to Roanoke Memorial because community hospitals were a better fit for the medical experience and type of patients they wanted to care for.” Another drawing card for Roanoke Memorial was that the hospital’s specialists eagerly participated in teaching family medicine residents, and generalists practicing in the community routinely volunteered days off to train the young doctors in the Family Practice Center.

“Those senior physicians had invaluable experience and guided the residents, seeing patients right alongside them,” says Dr. Amos, who continued to supervise residents once a week after he established his own practice in Rocky Mount, 30 miles south of Roanoke. In anticipation of Dr. Amos’ retirement in 2014, a Carilion family medicine resident joined the practice to help smooth the transition.

The creation of the Virginia Tech Carilion School of Medicine, started in 2007 and opened in 2010, solidified Carilion’s path toward becoming a major academic medical center. The system’s hospitals have continued to add faculty and have expanded into new areas of subspecialty care. “Between 2006 and 2007,” says Dr. Harrington, “we had phenomenal growth in the number of residency and fellowship programs we offered.”

Yet Carilion’s continued development of residency and fellowship programs has required an exceptional commitment to the mission of educating physicians. The primary funders of graduate medical education—the Centers for Medicare & Medicaid Services and the Veterans Administration—subsidize residents’ salaries and pay hospitals to train young physicians. In 1997, though, CMS capped the number of residency positions it would support at each hospital, leaving the institutions to cover the cost of any additional residencies. Carilion stepped into the breach, and today, when those 300 new trainees start working at Carilion this summer, the government will fund the training of only 190 of the residents and fellows. Carilion will pay the remaining 110 physicians’ salaries and training costs.

“Training those additional physicians affects our bottom line,” says Dr. Kees. “But Carilion is committed to providing the region with high-quality primary and specialty care.” And the residents and fellows continue to repay that investment handsomely.

“I’m so impressed with the caliber of physicians entering residency and fellowship programs today,” says Dr. Harrington. “As U.S. medical schools have increased the standards required for graduation, these doctors have become increasingly well-prepared to practice medicine when they join clinical settings.” And just as trainees emerge from their time at Carilion’s hospitals as better doctors, having been educated by a multitude of specialists and subspecialists, the faculty benefit as well, with residents and fellows challenging them to become better teachers and communicators, adds Dr. Harrington. And most important, patients benefit from better and safer care when all of their physicians are at the top of their game.

Nine years ago, neurosurgeon Gary Simonds, M.D., was worried about the seven residents in the neurosurgery training program at Carilion Clinic. Dr. Simonds, who established the residency program in 2006 and ran it until his retirement this year, knew these young physicians were under constant stress, and when he asked them to keep a tally of what happened to them in a typical day, the results were eye-opening. During each night on call, a resident might need to handle scores of urgent phone calls, and a week in the hospital often included at least a hundred interactions with patients who were seriously ill or dying. Conflicts with coworkers were common, and the residents rarely heard a word of praise. The survey responses confirmed Dr. Simonds’ suspicion that residency was taking an unnecessarily heavy toll on these doctors’ lives.

“Rather than assume that residents just needed to toughen up,” Dr. Simonds says, “I wanted to change our approach and arm them with techniques to mitigate the burden.” So, in partnership with clinical psychologist Wayne Sotile, Ph.D., an expert on resiliency and physician work/life balance, Dr. Simonds instituted monthly meetings with the residents and the entire neurosurgery team to develop and practice techniques for coping with stress.

“That Carilion supported and encouraged this intensive effort to improve resident well-being was unprecedented; no other medical center was doing anything like it,” says Dr. Simonds. Soon, other Carilion residency programs were consulting with Dr. Simonds and Dr. Sotile, and in 2015 the two published a guidebook of their techniques, which mostly involve small adjustments in attitude and outlook. Yet the changes seem to make a big difference in how residents perceive their training.

“Physicians are so focused on taking care of patients that they fail to recognize when they’re overstressed and fatigued,” says Dr. Simonds. Today, thanks to this training, Carilion’s neurosurgery residents seem happier and less stressed. Once subject to complaints from coworkers and patients for being short-tempered and abrupt, now they get compliments, and they’ve been recognized as the best consultants in the emergency room. “They are light-years from where they once were,” says Dr. Simonds.