A Clinical Care Pathway From the AGA, AAFP, ACOFP and Others

As outlined in last week’s Take 3, nonalcoholic fatty liver disease (NAFLD) currently affects approximately 1/3 of adults in the US and is associated with an increased risk of CVD, cardiovascular and liver-related mortality, and impaired health-related quality of life. Because NAFLD is largely asymptomatic, and because optimal timing of treatment depends on accurate staging of ﬁbrosis risk, screening at the primary care level is critical, together with consistent, timely, evidence-based, widely accessible, and testable management processes.

To achieve these goals, a multidisciplinary Clinical Care Pathway was recently published to provide explicit guidance on the screening, diagnosis, and treatment of NAFLD. This Pathway is intended to be a clinical roadmap for all who care for patients with NAFLD. Last week’s Take 3 reviewed the recommended diagnostic pathway for someone at risk for NAFLD ( Pointer 2 ). This week reviews the management pathway from the same Clinical Care Pathway. 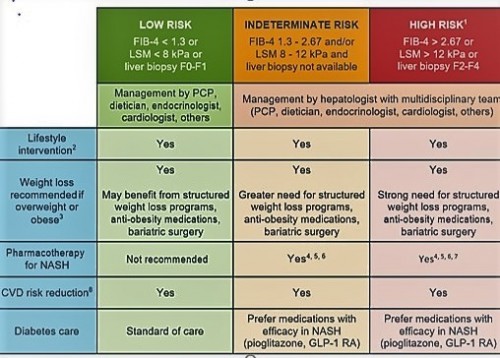 As noted in the Table, everyone should have lifestyle intervention focused on weight loss as the initial intervention. Date indicate even small amounts of weight loss can have substantial benefits in both slowing progression of fatty liver disease and decreasing CV risk. For many of these patients, a structured intervention will be necessary beyond merely advising and providing educational material.

For some patients with indeterminate risk and all with sever risk based on Fib-4 calculation and liver stiffness measurement, a more aggressive and structured intervention is recommended, including co-management with a hepatologist when available, and, when appropriate, evaluation for metabolic surgery. For patients with co-morbid diabetes, treatment with pioglitazone and/or a GLP-1 RA is recommended to help reduce progression.

Given the prevalence of NAFLD, this Care Pathway has been a good reminder for me as to how I often overlook the possibility of liver disease in my routine care of patients. Though not recommended in the Care Pathway, there is some evidence that for patients with biopsy-proven NASH and fibrosis stage ≥2 who do not have diabetes mellitus, vitamin E at 800 IU/day can improve steatosis and inflammation. However, there is a question of an increase in all-cause mortality for patients at does > 400 IU/day, so this is important to be aware of.

There has been a small lingering concern about increase in diabetes risk (incidence and progression) with statin use for years. The US Preventive Services Task Force talk about it in their statin recommendation, as does the American College of Cardiology/American Heart Association 2018 guideline on statin use. The benefit of statins in preventing atherosclerotic cardiovascular disease has been felt to outweigh any contribution to diabetes risk.

Researchers at the VA performed a retrospective matched cohort study to assess the risk of “diabetes progression” because of exposure to statins. They gathered patients over 30 with diabetes, then compared those that were started on statins with those who were started on either an H2 blocker or a proton-pump inhibitor (as a control condition). They monitored all patients for diabetes progression – a composite outcome (any one positive is counted as the outcome) of: “new insulin initiation, increase in the number of glucose-lowering medication classes, incidence of 5 or more measurements of blood glucose of 200mg/dL or greater, or a new diagnosis of ketoacidosis or uncontrolled diabetes.” The authors did a lot of work to make sure any difference in the groups were accounted for (propensity matching, etc.) and did a careful analysis to look for the outcomes. In the analysis, the statin users had a greater progression of their diabetes over the 12 years of analysis than did the control groups. (56% vs. 48%, OR 1.37, 95% CI 1.35 to 1.40, NNH ~ 13). This difference held up in multiple subgroup analyses, and there was a dose-response relationship between LDL reduction (which would vary with statin use) and likelihood of diabetes progression.

On the other hand, a systematic review of controlled studies with network meta-analysis looking at statin side effects, however, did not find this outcome. The researchers looked at 62 statin primary prevention trials (N=120,456) over almost 4 years for their reported incidence of side effects. They found self-reported muscle aches, some liver enzyme abnormalities, some mild renal insufficiency, and eye conditions (cataracts, and “other” eye diseases), but did not find evidence of increased diabetes or diagnosable muscle disorders. The quality of evidence in the review overall was moderate to high, but the evidence for the diabetes outcome had the most heterogeneity in the meta-analysis.

There’s no free lunch. Statins have proven benefits at reducing atherosclerotic cardiovascular disease but may well have some effect – over the long term – of worsening diabetes control. Since we are unlikely to get a large, randomized trial of statins with 10-12 years of follow up, we will have to pay attention to data like the VA cohort study to guide us, given its large numbers, long follow up, and significant effort to control for the multitude of factors that could explain diabetes worsening. In my opinion, this is not a reason to withhold statins given their known benefits, but simply to monitor diabetes control and adjust therapy as needed.

3) What is Your “Emotional R Naught”?

“You couldn’t be in his presence without feeling a bit of his joy.”

Everyone called him “Mr. Martin,” and with his trademark white Stetson hat, rose on his lab coat lapel, and welcoming smile, he served as the greeter at the main entrance of Carilion Roanoke Memorial Hospital up until days before his recent death at the age of 81. And while directing people, assisting them out of their cars, and helping to transport them may not seem like the description of one’s “dream job,” for Mr. Martin, it was exactly what he felt called to do, and did it for almost 64 years.

Whenever I was in his presence, even for a brief moment (usually while rushing through the hospital lobby to get to patient rounds), I always left that encounter feeling better about myself, my work, and whatever might have been burdening me at the time. He loved people and loved life, and it showed in everything he did. Indeed, his joy was contagious. I suspect we all know a “Mr. Martin.”

The emerging neuroscience of “emotional contagion” indicates that we all have “Mr. Martin potential.” Studies show that humans synchronize with the emotional state (both positive and negative) of those around them, either unconsciously or consciously. This emotional convergence appears to have both physiological and neurological triggers, and can happen from one person to another, or in a larger group.

Which brings me to R0 (pronounced “R naught”), a mathematical term that most of us were vaguely if at all familiar with prior to the COVID pandemic. The R0 number reveals the average number of susceptible people who will contract a contagious disease from one person with that disease. If there was an R0 for joy, Mr. Martin’s would have been quite high.

I’m left wondering that if there were such a measurement, what my own “emotional R0” might be, and if its contagion would be “misery loves company” or more along the lines of kindness, compassion, hope, and joy. In the upcoming week, I consciously intend to spread more of the later. This seems a wonderful way to honor the legacy of the “Mr. Martin’s” of the world, and to uplift both those around me … and myself. Will you join me?

Feel free to forward Take 3 to your colleagues. Glad to add them to the distribution list.

431 - Stopping Antidepressants, Best Diets 2022, We All Need Somebody

426 - Zinc and URIs, Discrimination in Healthcare, No Feeling is Final

424 - Diet and CV Health, Low FODMAP Diet and IBS, Getting (a) Physical

407 - Screening for CVD in Children, ECGs and Children, Constipation